Okay folks! It's New Year's Eve tomorrow!! And I stole this from my friend Chris Wallbruch years ago. I tried it in 2013 and it was an OK year - I tried it again in 2014 and while it was a rough year - this DID work for me. I did this in 2015 and while the end of the year was not what I expected - it was a very good year. 2016 was just a bitch and while I had no great windfall I have always had the funds to pay what needed to be paid. 2017 I managed to get a little more than I needed, but again no windfall. 2018 I have had a very good year - no windfall- but all the bills paid and I actually have $10 in my savings account (This is saying something considering I have had a $0 balance for a while). 2019 brought a lot of change in aspects of my life and while again no windfall, I have managed to pay my bills (a little late sometimes) but again I have money in savings and a money market now! 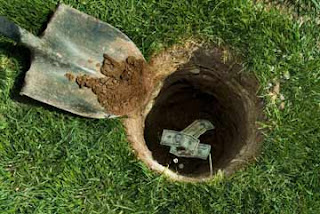 For those of you who are unfamiliar with this tradition, what you do is bury a dollar (or any amount above a dollar that you want) in the soil on New Year's Eve. This can be in a houseplant if the ground is frozen or inaccessible, but I like to go outside, dig a hole, and drop my dollar in. (I put it in a plastic bag). As you bury said dollar, say out loud, "I am burying my poverty!" TIP - if you do this outside, make sure you place some sort of marker where you bury your buck so that you can find it again!

You can't spend the money- you can either keep it or give it away to charity. Giving it away is the best so you are less likely to spend it.

I have had money come to me the 6 years I have done this - while not what I would call a windfall it helped me out of tough times so I am NOT complaining. 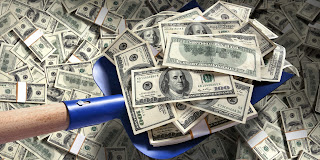 Dig up your wealth!

Posted by Elk Star Ranch Artwork at 7:20 AM No comments: