Every other year, the Estes Park Police Department puts on a Citizen's Police Academy. They announce it in the newspaper and online on the PD website.

Established in 1997, this academy is open for the public (over the age of 18). This academy allows the public to learn more about the workings of the police department. 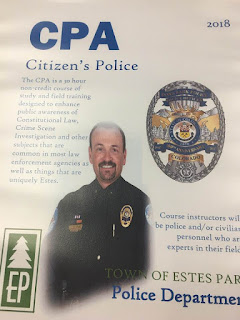 The topics covered varied each night and there was a syllabus containing the classes to be taught. 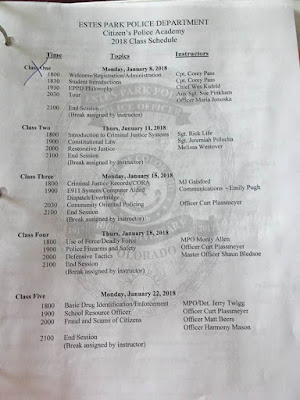 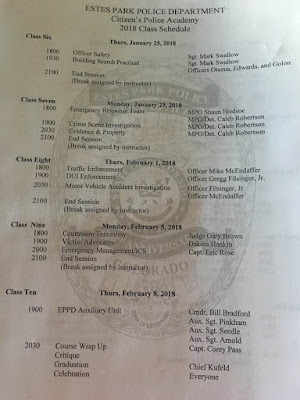 Opening night was introductions by Captain Pass and Chief Kufeld, followed by a tour of the Police Department and Dispatch with Auxiliary Sgt Sue Pinkham and Officer Jonoska.

The second night was Criminal Justice Intro with Sgt Life, Criminal Law (which is a hard subject to listen to because - well it's a tad boring) Sgt Polucha tried to make it interesting for us. Then there was the discussion about Restorative Justice - this is a really cool system that does the 6 R's of the community: respect, repair, responsibility, reconciliation, reintegration and relationship. It's conflict resolution at it's best. The website is here.

The third night was a short intro to Criminal Justice records. Then the computer aided dispatch. This was informative on how the EMS/911 system works in Estes Park. Being the first line of communication with the PD - it was an informational on the inner workings. Then there was Community Oriented Policing which is a commitment to building trust and mutual respect between police and the communities they serve.

The fourth night was the start of some very interactive classes. This night included use of deadly Force, Firearms and safety and Defensive Tactics. I think everyone loved seeing the different weapons and how the officers defend themselves when arresting a suspect.

Night five was drug identification - learning about the most common and not so common street drugs. A talk with the School Resource Officer about what he does while working at the school district. The final class of the night was Frauds and scams - talking about the latest things that people are trying to do to steal your money/identity.

Night six was Officer Safety and then everyone's favorite class - the hands on Building Search Practical.  We were given the chance to use (fake) guns and do a room entry as if searching for suspects in a building.

Night seven held a talk about the Estes Park Emergency Response Team (our SWAT). Then Crime Scene Investigation (another favorite where learning how the go through a crime scene). Final of the evening was Handling Evidence and Property Room.

Night eight was Traffic Enforcement, DUI Enforcement and Motor Vehicle Accident Investigation. With this one, the class went outside and did a traffic stop where we were looking for all the things wrong on the stopped car (expired tags, cracked windshield, the gun and knife in the car).

Class nine was a talk with the Judge about Courtroom Testimony. The Victims Advocates and closing with Emergency Management.

Class Ten told the class about the Estes Park Police Auxiliary (which I am a member since 2017). This is the volunteer police unit. Information can be found here! And then receipt of completion and celebration.

I could take pages and pages to go over this great program, but I will leave it that it is well worth attending.

Successfully completing the course gets your a certificate and a T-shirt.

This is the 2018 Class photo as posted in the local newspaper: 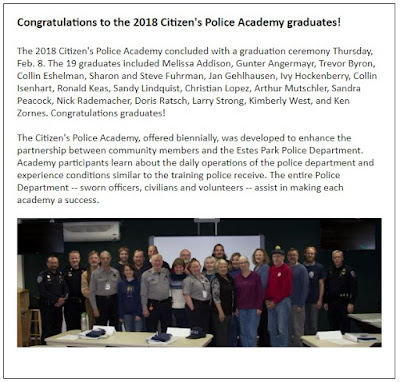 Posted by Elk Star Ranch Artwork at 2:56 AM No comments:

2018 Wellness Program: Challenge 11 for my EPMC 2018 Wellness Passport is to read a book of your choice (preferably a wellness topic).

I chose to re-read a book that inspired me. I have been having a very stressful time in late February, all of March and and the beginning of April as I have been house hunting for a rental place (a chore here in Estes Park.) as well as some other things.

I was boxing up books and saw this book and thought - you know it inspired me when I first read it, I need to reread it and use it for my wellness program book review.

The book is Spiritual Gangsta; the search for truth  by Bailey Chase. 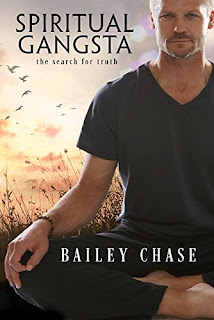 Bailey is an actor. He has starred in many things from Saving Grace to 24:Legacy to Longmire. I have been fortunate to meet him in person at LONGMIRE DAYS in 2016 and 2017. 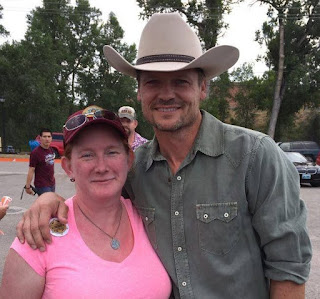 The thing about the picture above - I was almost 190# in this picture from 2016. I was very unhealthy. In 2017, when he talked about his book I figured I'd buy it just because it was Bailey, not realizing it would help me want to start a serious change in my life.

He wrote the book as a part memoir of his life and part self-help book.

He talks about things that happened in his life from growing up to school to his acting career but he also talks about finding Meditation, Yoga and other things that help him stay in the moment.

Reading this the first time inspired me to get off my rump and do Yoga. Rereading it this time - I took so much more from it that I obviously was not paying attention to the first time or just wasn't in a place to comprehend the first time.

What I mainly took in this time was to control how we react to things. I am a redhead with a hot temper and a lot of passion and righteous indignation.

He talks about witness consciousness - there is no judgement just acceptance and awareness. He talks of getting out of that reactive mode of emotions and think first to see clearly and speak with your true self and not your emotions. Turn off entitlement and expectation. You are not owed anything in this life. Take ownership for one's self.

This is something I have struggled with all my life - my emotions. It's part of the reason I have had such rough relationships and health issues. Reading this a second time really helped me to see what I need to work on and step out of my ever present emotions.

It struck home the need to pay attention to my feelings, be responsible to myself, hesitation changes everything, accept who I am and play the hand dealt me, love myself, be interested in others and let go of my ego.

The first step to wellness is the right mind-set; thoughts and emotions can help or hinder us on our journey. I look forward to practicing meditation, visualization, yoga, having a clear mind, and an open heart. I look forward to changing and working on my perspectives and seeing how this helps my wellness journey this year.  In doing so, I inspire to be a Spiritual Gangsta.